The human race is practically witnessing Darwin's “survival of the fittest” theory to fight the pandemic. A revisit of epidemics/pandemics reveals unthinking actions to conquer or eradicate the disease, which included committing a few slip-ups and plans to cover up these gaffes before finally arriving with a plan to counter the disease.

The current SARS-CoV-2 has challenged the human race on many fronts like its origin, spread, finding a cure, post-treatment regimens, etc. Each individual and nation has reacted to the pandemic in a way that was judged best by them. As a classical synthetic organic chemist, my first thoughts in the current situation were to look at possible methods to introduce a drug at the earliest, to combat the pandemic. However, my enthusiasm to fight the pandemic briefly halted with the thought that a new drug launch is not possible in a short period. A good 8-10 years with almost one to two billion dollars of investment is required for a new drug to reach the market. This huge investment without instant solution was not welcome.

This is when 'Repurposing old drugs' emerged as the possible solution to combat the pandemic. A quick survey in scientific literature revealed some known anti-viral drugs prescribed by medical practitioners to save lives. Researchers started to look at in vitro and in vivo assays of all FDA approved drugs for repurposing to handle COVID-19. Drug molecules working on diseases closely related to SARS were screened for their efficacy against SARS-CoV-2. Molecules like Remdesivir, Favipiravir and Umifenovir were acting better against the virus. Globally, researchers are working for developing drugs, and these efforts will continue until the virus disappears or a better prevention or cure is discovered.

Among the three antivirals, two drugs caught my attention for repurposing. The first was the old Japanese off-patent antiviral drug Favipiravir, structurally looking like a twin brother of pyrazinamide (the powerful anti-TB drug), and the second a clinical molecule of Gilead (frontrunner in discovering drugs for viral treatments), Remdesivir, a synthetically challenging molecule mimicking the nucleoside skeleton. Remdesivir is structurally complex and was my preferred molecule whereas Favipiravir was a quick solution and hence was considered first.

The idea of repurposing of drugs took shape when I challenged my research group and senior colleagues Dr Raji Reddy and Dr Prathama at our annual New Year meet to think about repurposing old drugs used for some neglected and orphan diseases which had very little relevance to SARS-CoV-2. COVID-19 was still a few weeks' old disease and not in the radar of many scientists. Little did we realise that this challenge would lead the team to jump into the disease dynamics of COVID-19 as early as mid-February with the onset of global eruption.

This was the time Dr Y.K. Hamied, Chairman of Cipla, had invited me along with my team to visit Mumbai for some collaborative projects. The discussions on COVID-19 and the vision of Dr Hamied prompted us to commence work on the affordable process of drug development, the hallmark of Cipla-IICT combination. To control the pandemic, lockdowns, cancellation of flights and other slew of measures became the norm of the world soon after. 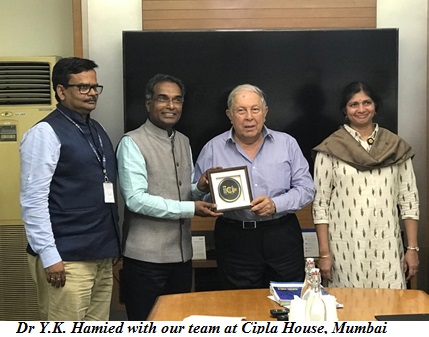 My research team of students and scientists decided to stay back in the hostel and guest houseof IICT to ensure that the work round-the-clock was uninterrupted. Developing the process that leads to treatment was an organic chemist's way of delivering relief to the affected. One anticipation I had was whether Gilead would be generous enough to give a voluntary licence to a few Indian companies or readymade process for manufacture of Remdesivir when faced with the pandemic of such proportions, which turned out true later.

The major challenge was the raw material supply chain given the lockdown which disrupted global supply chains. Our process was to develop a technology based on chemicals sourced from Indian companies, thus making our job doubly challenging. Accepting the challenge, the structure was thoroughly examined, and after going four steps backwards in the process, a chemical available with Indian companies was identified. Well-wishers of IICT, Dr Rafi from Carbanio representing a B2B portal along with other suppliers were constantly working with us to make our journey comfortable during the lockdown period. All sincere efforts always have successful conclusions.

The process development of Favipiravir had to move at a lightning speed. Mr Manjinder Singh, Head R&D Cipla, and Mr Sharadd Jain, Vice President Cipla, under lockdown conditions, with the proper permissions, travelled for 15 hours from Mumbai by car to reach IICT to collect the drug product and the technology developed for early formulation. This was to ensure there was no delay in approaching the Drug Controller General of India (DGCI) for necessary clearances.

The support of Dr Shekhar Mande, DG CSIR, tight timeline schedules of Dr Hamied, and research team working round the clock with a zeal to develop a process saw that in less than four weeks Favipiravir was ready for Cipla! Unimaginable! This period is too small in a research environment, and I could deliver the drug to Cipla, which in turn could submit an application to DCGI for approvals immediately thereafter.

Glenmark finally launched Favipiravir under emergency authorization, closely followed by Cipla and few other companies. Importantly, this development has highlighted two factors. One, the chemicals for the drug were indigenous, decreasing dependence on imports, and secondly, the chemicals were sourced from Indian industries supporting the 'Make in India' initiative. Therefore, CSIR has contributed in making a drug molecule available to Indian patients bringing down the dependency on imports. The prices of the key chemicals are controlled by countries importing them, which was witnessed in pricing of the drug in the last few weeks. The drug manufactured from imported chemicals was priced at Rs. 103. 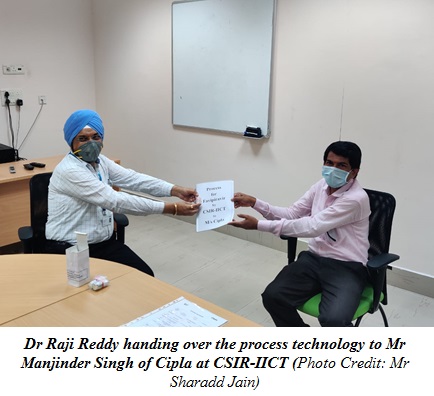 The technology we developed and the improvements we and other groups are implementing decreased the price to below Rs 50 for a 200 mg tablet of Favipiravir. I am confident with improved process technology of CSIR-IICT team along with our industry partners for key starting materials such as malonic acid and ammonia the price of the drug can witness a further dip.

While Favipiravir may not be an ultimate solution, but this successful effort has given the chemical community a great confidence to develop any complex process in a few weeks time! The super fast launch of the drug has given us confidence that nothing is impossible and highlights the tremendous potential in the academia-industry partnership of our country. My first 'love' Remdesivir was also developed in parallel, and technology shared with companies. Today, CSIR can proudly say we have contributed to the mitigation of the pandemic using chemicals from Indian manufacturers. Truly, Atmanirbhar Bharat! 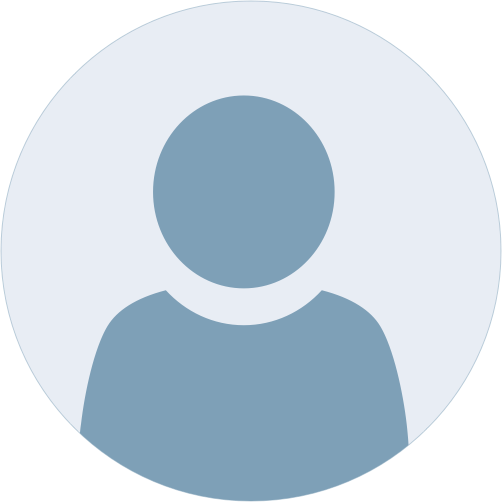